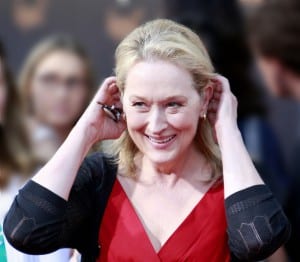 Meryl Streep, a good example of an actor who practices mature interpretation.

We see plenty of strong actors, with fluent emotional instruments, who give good performances, but their work hasn’t yet grown-up. Because it’s an immature reflection of life. We sometimes see less talented actors give more mature performances because they’re better at reflecting the complexities that come up in the real world of relationships.

I saw a man interviewed who said he had left the Catholic Church at 15 years old because he couldn’t accept the hypocrisy. He went back to the church at 40 because he’d come to understand that all groups, like all people, are hypocritical. (Yes, even me.) But he fought the Church during the child molestation crisis to win full disclosure and compensation for the victims; then went to mass on Sundays.

Likewise, a character, interpreted maturely, will tolerate the hypocrisy of the other characters, impatiently accept the bulk of it and draw the line somewhere.

Actors are often passionate people who believe strongly in their political opinions. A good exercise is to articulate what’s wrong with your own point-of-view and what’s right with the other side. (Making certain, of course, never to do so in a fight.)

A mature interpretation assumes the character is aware of the myriad considerations comprising her Given Circumstances. If you assume she’s more with-it than you are, you’ll have more fun playing her and the audience will be more excited by your work.

But what, you may ask, if the character is suppose to be stupid? Play her as a savant. Believe me, if you play straight stupid we’ll assume that you’re an imbecile too and curse you for wasting our time.

Watching a young actor rehearse the simpleton, Lenny, in the play Of Mice and Men, is often a study in tedium. But at some point in the process, if the actor is good, he finds a way to play the part at the Top of his Own Intelligence. It is, after all, perspicacious to spend at least some of one’s time stroking puppies.

Someone once said, “Always play that you know.” This is a handy thought to apply in any acting situation and the hallmark of Mature Interpretation. The sister-thought that really helps is, “And always play that they know.” Thereby raising the intelligence of the other characters, so that the whole altercation is happening at a higher level.

And now, the final side to the triangle: “Always play that the audience knows.”