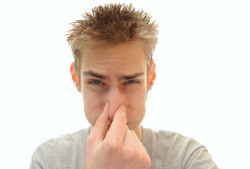 I like the term, “Suggestibility.” It sounds a bit like “Vulnerability,” and reminds me of hypnosis. It makes me think of dreaming while I’m awake and taking actions.

Everyone’s suggestible. You had a guest for dinner last night, remember? And she ate too many of those olive appetizers you set out. She loved them and ate nine or ten. And she wanted lots of sugar in the Margaritas that you made her. She drank too many, too quickly. You saw her getting drunk. You tried to slow her down. And then threw up on your floor. She was embarrassed. You wiped it up. But that smell… That vomit smell… You might begin to think that some of it got on your clothes, something you’re wearing today. Smell it, now? That strange, sour vomit smell… You wiped it off the floor, but some of it must have splashed. That sour smell… It’s in your nose. Inhale. Can you smell it now?

This vomit example is a sensory application, but you would do the same with Backstory. (If the dialogue mentions that someone ripped you off, you might suggest to yourself, “We were going out to meet some girls and he gets to my place early… I was a little annoyed, ’cause I hadn’t even shaved… But I ask him if he wants a beer and he says yeah… I go into the kitchen, but remember he likes Scotch… I lean around the corner to offer him some whiskey and I see the guy taking some bills I had in a bowl… The fucking guy is in my apartment, taking my cash and putting it in his pocket.”)

Is Suggestibility the same as Imagination?

Yes, but I like the word Suggestibility because it implies a way to use it. You suggest things to yourself…

Imagination implies that you use images, which are also very effective, but images aren’t the only way in. We talk to ourselves in particular ways in order to get a rise. We seduce ourselves into believing.

A performance requires the layering of multiple suggestions.

Suggestions about the place, the objects, your clothes, the past, what you want and about the other people. Especially the arguments.

We talk to ourselves about what is going on in a way that feels like life. This produces Engagement.